The Mako Server is licensed similar to freeware for small companies. See license at the end of this webpage for details.

Follow the instructions outlined in the Getting Started with the Mako Server guide.

An online VPS running the tutorials is also available. You may use the online interactive tutorials by navigating to:
http://embedded-app-server.info.

We provide an extensive list of written tutorials, which covers everything from Lua development to hosting IoT servers.

The Mako Server tutorials are optionally available as a Docker image.

Mako Server vs. other Lua Frameworks

Virtually all other Lua web frameworks are designed as web server plugins and require that you assemble a complete setup. These frameworks have a tendency to be big so if size and speed matters, Mako Server may be a better choice (see below). The Mako Server is based on the Barracuda App Server Library which is optimized for resource constrained systems. A copy of the Barracuda App Server Library's extensive documentation can be found online and the Mako Specific features are also included in the online documentation.

Why use the Mako Server for hosting online web sites?

Take a look at the following screenshot from our Uptime Robot's dashboard. The screenshot shows a list of Mako Server powered web sites running on Virtual Private Servers (VPS). 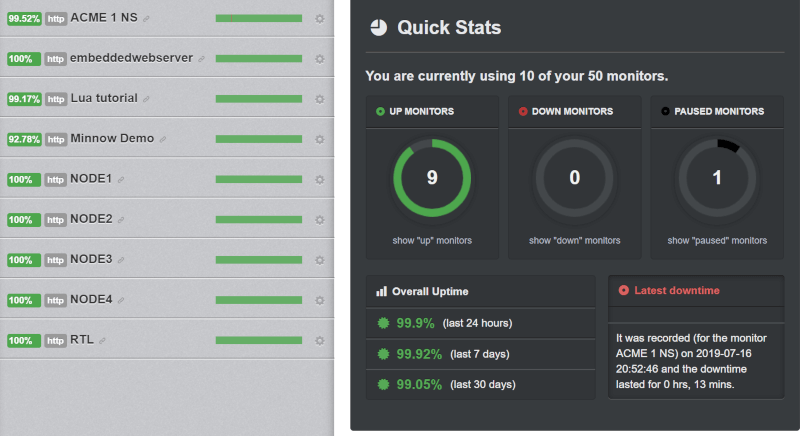 We use several low cost VPS service providers and not all provide 100% uptime, but pay attention to NODE 1 to 4. These four nodes are part of the Mako Server's IoT SMQ cluster demo. Note that the nodes all have 100% uptime, and they run on Virtual Private Servers that cost less than $12 a year. Some VPS providers provide rock solid low cost Virtual Private Servers, but they are usually resource limited, meaning that standard application servers cannot be used. However, the Mako Server is super light on resources and has no problem running on a resource constrained VPS. See the online Mako Server installation tutorial, Setting up a low cost IoT Broker, on how to install the Mako Server on a VPS. The online Mako Server installation includes a web based IDE and is not limited to running the SMQ broker example. Simply delete the SMQ broker example using the Web IDE if you want to create your own custom application.

The Mako Server includes a super efficient publish/subscribe protocol called SMQ that is ideal for online gaming infrastructure. The SMQ broker is an integral part of the server. The broker can be extended using the public API, thus making it easy to interface your own messaging infrastructure and Lua server logic with database services.

The SMQ protocol enables clustering and scaling. See the SMQ cluster demo for more information. SMQ includes ready to use stacks for Java/Android, JavaScript, and C/C++.

The Mako Server's included SMQ protocol is ideal for IoT. The following video shows how a device can be controlled from a web browser in real time. The Mako Server acts as a broker for the communication between the browser and the device.

See the IoT page for more information on the SMQ protocol.

Includes Easy to Use Lua Debugger

The Mako Server includes a Lua debugger making it easy to step through Lua code, set breakpoints, and inspect/modify variables.

The benchmarking should have been performed with other dynamic content frameworks such as PHP, but we were unable to find any reliable benchmarking data. In any event, PHP is slower than static content when run in an Apache server.


The Mako Server is a commercial product, but is free for small companies. See Real Time Logic's license page for details.

The Mako Server consists of one executable file that includes all of the following four components: